Pool, also more formally known as pocket billiards (mostly in North America) or pool billiards (mostly in Europe and Australia), is the family of cue sports and games played on a pool table having six receptacles called pockets along the rails, into which balls are deposited as the main goal of play. Popular versions include eight-ball and nine-ball. An obsolete term for pool is six-pocket. 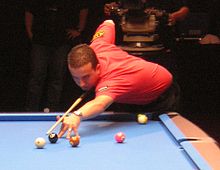 The Oxford English dictionary states that pool is generally “any of various types of billiards for two or more players” but goes on to note that the first specific meaning of “a game in which each player uses a cue ball of a distinctive colour to pocket the balls of the other player(s) in a certain order, the winner taking all the stakes submitted at the start of the contest” is now obsolete and its other specific definitions are all for games that originate in the United States of America.

Outside the cue sports industry which has long favored the more formal term, pocket billiards is (in English) more commonly referred to as pool, due to perhaps an association with the poolrooms where gamblers pooled their money to bet off-track on horse races. Because these venues often provided billiard tables, the term pool eventually became synonymous with billiards.

In the United States, though the original “pool” game was played on a pocketless carom billiards table, the term later stuck to pocket billiards as it gained in popularity. As the traditional view of billiards as a refined and noble pastime did not blend well with the low-class connotations of gambling, the billiards industry began to distance itself from the term pool beginning in the late 19th century.

There are hundreds of pool games. Some of the more well known include eight-ball, nine-ball, ten-ball, straight pool, and one-pocket.

There are also hybrid games combining aspects of both pool and carom billiards, such as American four-ball billiards, cowboy pool and bottle pool. 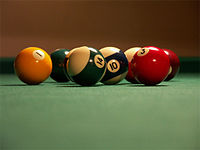 There are many variations of games played on a standard billiard table. Even within games types, there are variations (e.g. 8-ball, convergence 8 ball, etc.), and people may play recreational using easier versions of a (more difficult) game. A few of the more popular examples are:

Eight Ball: A two-player game in which the ultimate goal is try to pocket the eight ball (after designating the pocket). This is only allowed after pocketing all of one’s designated balls, either striped or solid.

Seven-Ball: A two-player game in which the goal is to pocket the seven ball on one’s elected side of the table. The cue ball must initially contact the lowest-numbered ball on the table on each turn.

Bank Pool: A two-player game in which legally pocketed balls must be banked into the pocket (using one or more banks). Any ball on the table can be selected and the game is call ball-and-pocket.

As a competitive sport, pool is governed internationally by the World Pool-Billiard Association (WPA), which has multi-national, regional affiliates comprising the All Africa Pool Association (AAPA), Asian Pocket Billiard Union (APBU, including the Middle East), Billiard Congress of America (BCA, Canada and the US), Confederation Panamerica of Billiards (CPB, Latin America and Caribbean), European Pocket Billiard Federation (EPBF, including Russia and the Near East), and Oceania Pocket Billiard Association (OPBA, Australia, New Zealand, Pacific islands) The WPA represents pool in the World Confederation of Billiard Sports, which in turn represents all forms of cue sports in the International Olympic Committee.

Some of the other cue sports that come under the auspices of the World Confederation of Billiard Sports are The Union Mondiale de Billard (French for World Union of Billiards) is the world governing body for carom a pocket less form of billiards, and the World Professional Billiards and Snooker Association (professional) and International Billiards and Snooker Federation (amateur) the world governing bodies for snooker and billiards (English) other cue sports played on a table with pockets.